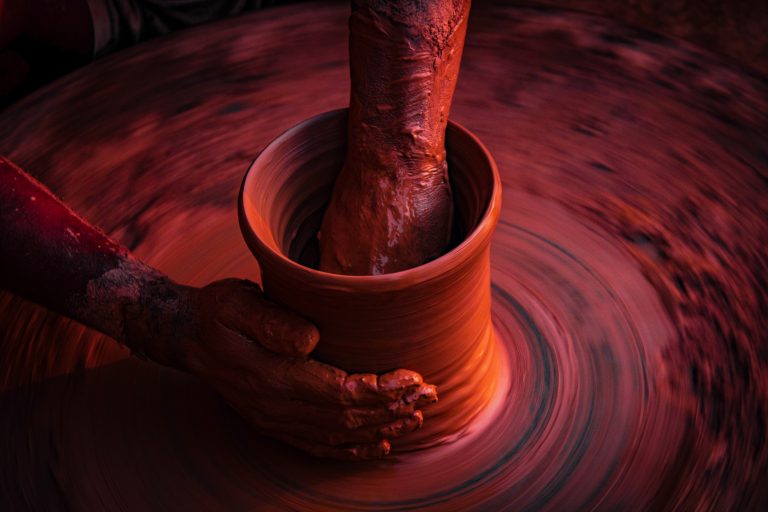 Can you recognize your friends’ and family members’ hand gestures? People have distinctive gestures: maybe your friend clasps her hands when she’s nervous, your mom taps her fingers together when she’s excited, or your cousin wags two fingers when making an argument. Now, imagine local artisans who hand-make their wares. Their hand gestures are implicit in the production of an object. Indeed, archaeologists have found that Indian potters’ personal gestures can help identify the maker of a given pot. In this way, a maker’s gestures form an identifiable signature that is inherent in the object they’ve made. Furthermore, certain tribal groups may exhibit long-standing artistic practices that signal the origin of a piece through its materials, the tools by which it was made, stylistic selections, and other meaning-making choices.

In the Western economy, a premium is placed on hand-made wares: shoppers are consistently willing to pay more for objects that are hand-crafted by individuals. Particularly in an era of global outcry surrounding climate change – of which industrial fabrication is a major contributor – consumers are seeking out objects that invoke home-grown craftsmanship. This proclivity is part of a broader trend towards local, organic, recycled, hand-made, unique, and artisan purchasing behaviour. Similar trends are also occurring among Indian elites who are reviving the popularity of handloomed saris. However, the situation in India exhibits further nuance, as evidenced by a recent conversation I had with a contemporary Indian artist, who described a societal association of traditional hand-made wares with certain socially marginalized castes.

In a recent study, my collaborator Angel Hwang and I examined what factors influenced users’ perceptions of creativity online. We discovered that viewers evaluate the creativity of an output according to the perceived process by which it was made. Those items that involved more complex processes – and particularly those that are handmade – were rated as more creative (and therefore, more valuable) than those that were not. As has been shown in previous research, viewers accorded a premium to those pieces that contained representations of hand-made processes, such as visible brushstrokes. In these ways, a visual and physical representation of hand-made-ness, as well as advertising and branding messaging touting hand-made processes, serves to increase creative value.

As Payal Arora highlighted recently in the Recliner Designer podcast, Western ideals exhibit a dichotomy between “hand-made” objects and mass production: it is viewed as contradictory for an item to be both hand-made and mass produced. That is, Western populations expect that only a small quantity of a given hand-made object exists. However, Payal pointed out that in Indian contexts, many artisans are both hand-making and mass-producing traditional objects (e.g., saris). In many cases, these mass production sites represent poor working conditions and tireless bodily effort, where locals – women, in particular – toil for hours on end to hand-make a large quantity of a given object.

This presents a predicament for digital platforms on which such items might be sold. Western interfaces and economies begin to unravel when confronted with the sale of objects that are both hand-made and mass-produced. For instance, a platform like Etsy – purportedly designed for the sale of hand-made objects – uses algorithms to deprioritize objects that appear to be mass-produced. This results in an unfair disadvantage for such women artisans in the Global South. Furthermore, the platform maintains minimal accountability due to the “black box” nature of algorithmic decision-making.

Indeed, online platforms have resulted in many such disadvantages for populations in the Global South. As internet platforms are primarily developed by Western companies, Western norms of data governance are implicitly imposed upon an increasingly global user base. In the cultural sector, this process may represent a new form of appropriation. For instance, algorithms developed by Western entities are being used to “authenticate” artistic outputs. However, creation processes in the Global South – which are often communal – do not necessarily follow a Western construction of provenance. Similarly, algorithms that are used to determine whether an object is legitimately hand-made for the purposes of value creation (e.g. eligibility for Etsy platforming) may subscribe to the Western hand-made/mass-produced dichotomy described above, thereby improperly classifying the outputs of traditional Indian models of creative work.

It is a connected platform’s design with which a community interacts: as the only tangible and user-facing aspect of users’ online experience, an interface’s affordances shape data, usage, and privacy decisions. Therefore, it is imperative to consider how such interfaces may be designed in ways that are inclusive – rather than dismissive or even exploitative – of local cultural communities. When platforms are designed in an inclusive manner, access to a global audience of consumers may further reverse the colonialist power dynamic by providing local artisans with avenues for development, empowerment, and financial security.

The first step in designing platforms that are inherently inclusive is to conduct research into the diverse range of users that may interact with the platform. This will formulate a foundation of empathy upon which truly inclusive platforms may be designed. By understanding local creative processes, for instance, a platform may be designed that fits into existing cultural practices, rather than demeaning or obfuscating current modes of creative expression.

Nanako Era, Molly Bloom, Francesca Kazerooni, Liza Meckler, Emma Siegel, and Erica Ellis, and I have written a guide to inclusive research. While it centres the experience of people with disabilities, many of the approaches will resonate with those interested in conducting research that is inclusive of other attributes, including cultural identity. For instance, one must carefully consider the mechanisms by which participants are recruited: rather than cold, individual outreach, building relationships with trusted community groups could be most beneficial for the communal nature of creative collectives in the Global South. (Though, of course, it’s worth considering who may be excluded from such collectives.) Similarly, access is a key consideration: in the guide, we offer tips for ensuring that a participant is not excluded from research due to the devices they use or their mechanisms of transportation.

In the case of artisans that are selling both mass-produced and hand-made objects, Western platforms must re-consider their traditional models of the creative economy. By imposing their own assumptions about creativity on a global user base, Western technology companies are inhibiting local cultures’ creative norms.

This blog was originally published by FemLab.co. FemLab.co is a seed-funded initiative by the International Development Research Center (IDRC), Canada, as part of their Future of Work series.

Impacts of the COVID-19 pandemic on income and earning opportunities: Findings from nationally representative surveys in India and Sri Lanka

This reportage delineates the impact of the pandemic on income and earning opportunities of men and women in Sri Lanka and India. This serves as a backdrop for how men and women engaged with the digital ecosystem of work during…