Greater inclusion in the technology sector – specifically ensuring that women and other under-represented groups can find gainful employment within it and make meaningful contributions to the sector – is predicated on building computing capacity of these demographics. Teaching coding skills, and broadening individuals’ exposure to digital industries writ large is a critical first step to achieving this reality.

Achia Nila is the founder of Women in Digital, a hybrid coding academy and digital agency based in Bangladesh, with operations throughout the country. WiD is 100% female owned and run. The academy exclusively trains female coders in Bangladesh and has also built a small presence in Nepal. Nila founded the company in 2013 in response to the large underrepresentation of females pursuing computer engineering jobs in the country. An engineer herself, Nila worked in the industry for nine years and during this time observed a dearth of women entering this field, a lingering challenge in the journey towards gender equity in the country, as well as a missed opportunity to cultivate talent and generate returns from it. As she ventured down her own career path, time and again she sought to employ female engineers, but often found the talent pool minimal.

Thus, Nila and her team at WiD endeavor to empower women with computer engineering training and give them an opportunity to command better salaries as well as more senior, influential positions in their companies.

WiD has a multi-pronged strategy that goes beyond simply building skill sets and helping women find jobs in the technology sector. In addition to its core mission, WiD is also an advisor and mentor for universities and employers, helping to raise awareness on both the need to educate women in the computer science space, as well as the business sense it makes to hire them. “When I started my computer engineering degree my mother had no idea what this career track could look like, so she was not able to guide me in my university,” Nila says. She hopes that as a byproduct of the training, women who have completed the courses can help guide their own daughters down the road to become engineers as well.

Here is how the model works: Women receive training in a wide range of digital and technological areas and then can join WiD’s adjacent digital agency, which carries out outsourced projects for various clients both in and outside of Bangladesh. All training until 2018 was given for free, and the trainings were financed through WiD’s digital agency (which serves as a digital outsourcing hub for companies), as well as grant funding. After 2018 Nila created a policy wherein students who could pay may do so, but those who couldn’t pay were enrolled for free. WiD has its own curriculum, which begins with soft skills training, digital skills training and English language training. From there, they progress into more advanced teaching, focusing on Java, Python, and other programming languages. WiD then gives the students internships, and can also help guide them negotiate the freelance market.

After the training, most graduates want to work in the large cities, though Nila wants to decentralize their graduate network so that women can work throughout the country, and thus WiD can expand its impact nationally. To help in this decentralization process, WiD has established five different training locations throughout Bangladesh. Each area offers different types of employment opportunities once students finish their training. For instance, in Dhaka, many graduates go on to work in digital agencies, including WiD’s, and are often in roles that require higher English proficiency levels. However, in rural areas jobs require less English language skills, and often focus on the e-commerce industry. Nila says that e-commerce has been particularly popular in rural areas because graduates living outside of urban areas (while often being less aware of the possibilities of work in the tech sector) have an easier time understanding the value of the e-commerce vertical in general, and thus are more open to enrolling in training programs, with the belief that it will lead to tangible job opportunities. 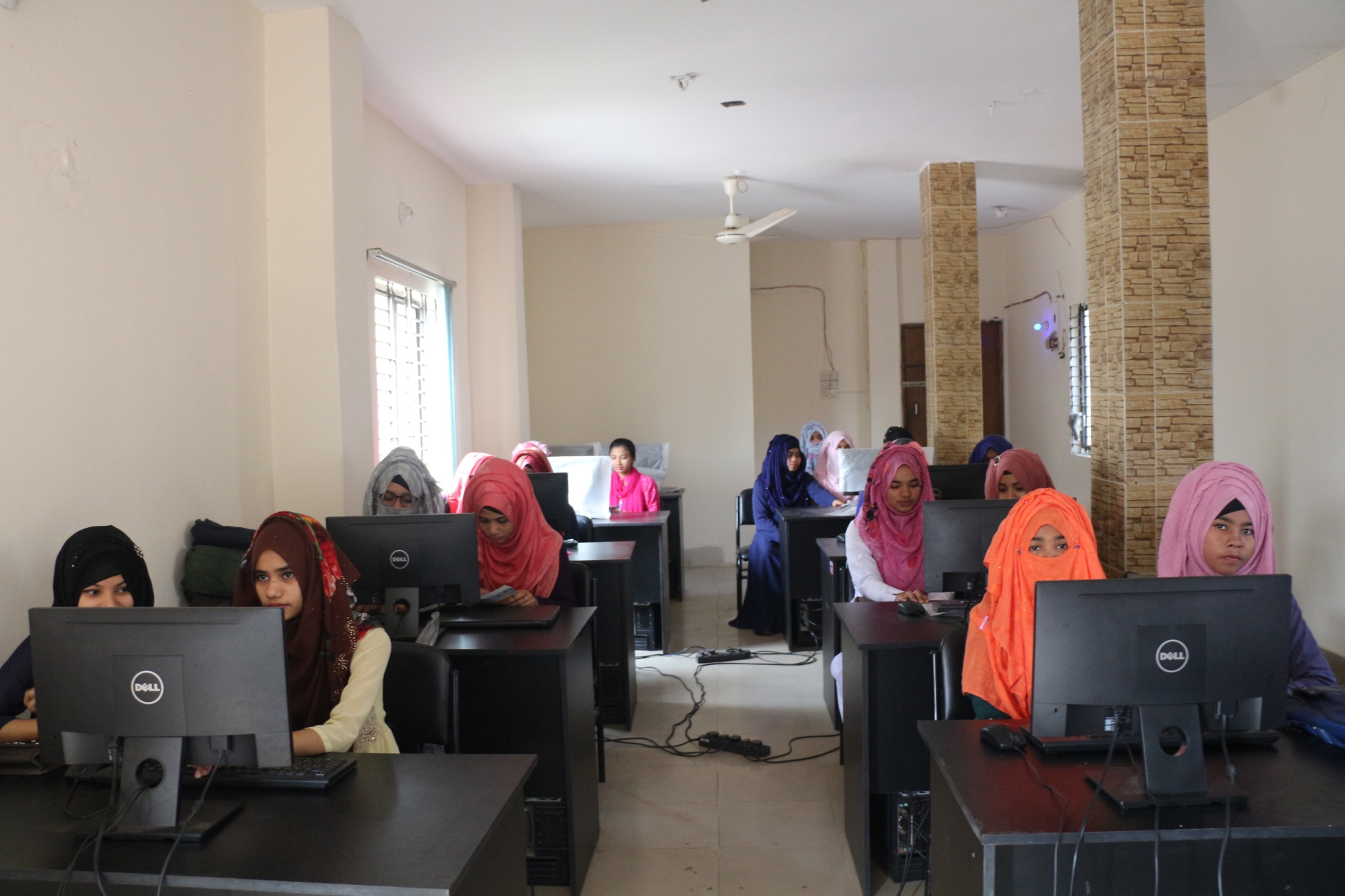 Many women join WiD’s digital agency following completion of the coding program. Nila cites their motto “empowerment through technology” and explains that women in urban areas have been most receptive to embracing this motto, as they are often more aware of career paths in tech industries. Contrastingly, women in rural areas tend to be less aware of the value, as well as pathway, to finding jobs in this sector. Additionally, other reasons including few role models for women in the tech sector and general cultural norms that limit females’ role in the labour market have also been found to contribute to such barriers in similar contexts. Given this confluence of challenges, Nila and her team have to allocate more time to simply educating potential students and employees in rural areas on the benefits of pursuing this line of work.

WiD’s impact to date is significant. Nila and her team have facilitated access to 7,000 jobs (both full-time and part-time, as well as with WiD’s agency and external employers), opened up five training centers that have trained more than 10,000 women. The company has helped to place women in roles ranging from software and web and mobile app developers and are now expanding into game creation as well. They have also trained 500 women and girls in Nepal. And Nila is far from finished. She is keen to build on the progress of the Nepal training program and to bring WiD’s services to more countries, while also continuing to promote women’s empowerment through technology training in her home country.

However, the two largest mountains that Nila and WiD still have to climb concern the need to educate local populations and employers of the value of WiD’s work, as well as build a financially sustainable model. Regarding the first priority area, Nila says “Often I feel that what I am doing in Bangladesh is still underestimated by people in the country.” International clients tend to understand WiD’s mission and value-add better than locals. The market still might not be ready to absorb the female engineers. We have not gotten any local or government support, but we have received a lot of international support.”

While she does not face much, if any, interference locally either, simply convincing the market ­ e.g. women, their families, employers and universities ­ that WiD’s mission and vision are a worthwhile endeavor, is an ongoing hurdle. Achieving financial sustainability, another lingering challenge to date, can also help in this capacity, as building a profitable business model can contribute to building both legitimacy and long-term prospects for WiD. In doing so, women may also see that the “the stigma surrounding women working as engineers” as Nila puts it, is no longer an issue as this field can lead to enriching job prospects. Perhaps most importantly, by breaking down this stigma WiD is helping to lay a foundation from which the women who enroll in its programs receive relevant training that provides them with a skill set that they can use to immediately acquire, as well as sustain, gainful employment. Successful completion of the program can empower the women, enabling them to play an active role in their local economies, while also setting a precedent for others to follow in their footsteps. By giving Bangladesh’s women a versatile, in-demand expertise, WiD plays a key role in gradually shifting the landscape, as well as conversation, around gender equity and economic empowerment in the country.

This blog was initially published on 3 Sep 2021 on the website of Feminist Approaches to Labour Collectives, FemLab.co – a project that is part of the research initiative Women, Work, and the Gig Economy. Follow the project on Twitter and Facebook.

“The support has to come from home”: Evidence-based assessment of platform work in India

In this FemLab.co blog, Sreelakshmi Ramachandran follows the story of Mahalakshmi, one of India's few female rideshare drivers.

The Future of Work and Generation Equality

Is technology exacerbating inequality? And if so, can we fix it?

The Gig Sisters Episode 1: In the Mood for Food

The COVID-19 lockdown forced many businesses, big or small, to innovate and find creative ways to stay relevant. This included small restaurant owners and home-chefs across the country. In the first episode of The Gig Sisters, we look at the…

In this episode of our DDE Talk, Laura Johnstone will interview one of her long time client Mary Saunders to talk about her Digital Transformation during 2020 and the COVID lockdown. They will go through all of the trials of…

Launch of the ILO`s World Employment and Social Outlook 2021 Report: The Role of Digital Labour Platforms in Transforming the World of Work

Virtual press conference with the International Labour Organization regarding the World Employment and Social Outlook 2021: The role of digital labour platforms in transforming the world of work.