This blog highlights preliminary findings from a study that explores the impact and challenges of platform-based work on women's agency in Thailand’s care economy.

The proliferation of digitally mediated labor platforms in predominantly precarious work, such as care work, has significantly changed the circumstances which shape the experiences and agency of care workers. Any discussion on the future of work is incomplete without an examination of care work and how technology impacts women engaged in it.

Between January 2019 and June 2021, the Just Economy and Labor Institute (JELI), with support from the International Development Research Center (IDRC, Canada), conducted action-oriented research focusing on Thai platform-based care workers, specifically domestic workers and massage therapists. JELI conducted surveys with 295 women workers, which included 148 domestic workers and 147 masseuses from Bangkok and Chiang Mai. The findings from the surveys were supplemented with platform interviews and observations, as well as focus group discussions with workers.

This research reveals the impact and challenges of platform-based work on women’s agency in Thailand’s care economy. Here, we bring you some preliminary findings: 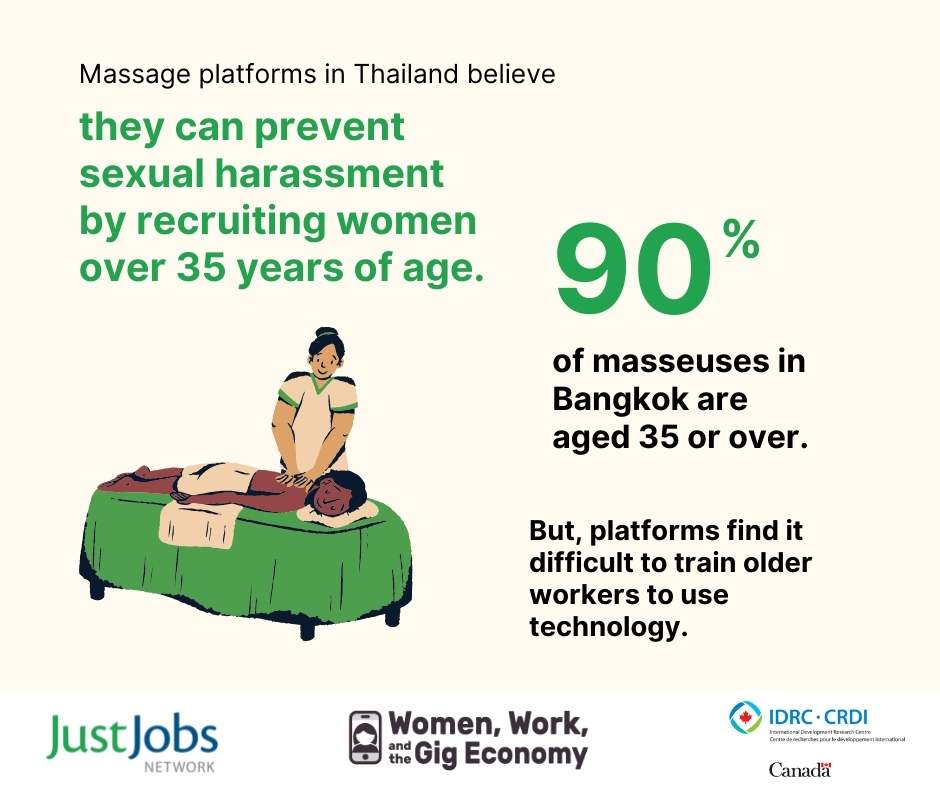 Nearly 90 percent of masseuses in Bangkok are aged 35 or over, in part due to the recruitment policies of platform companies. During interview, companies like Wongnai, Or’Ease, and MyTHERAS revealed that they believe sexual harassment can be prevented by recruiting women over 35 years of age. At the same time, these platforms also admitted that they struggled with training older workers to use technology. 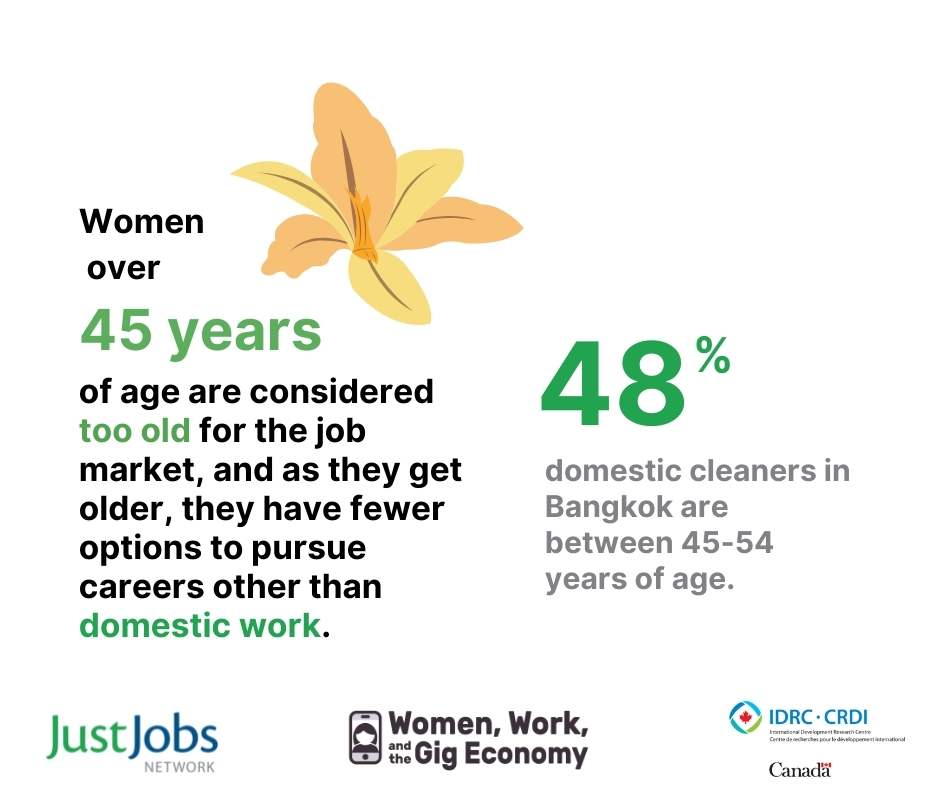 Similarly for domestic work, a large fraction of domestic cleaners (48 percent) in Bangkok are between 45-54 years of age. The women interviewed revealed that they are considered too old for the job market in Thailand, and as they get older, they have fewer options to pursue careers other than domestic work. 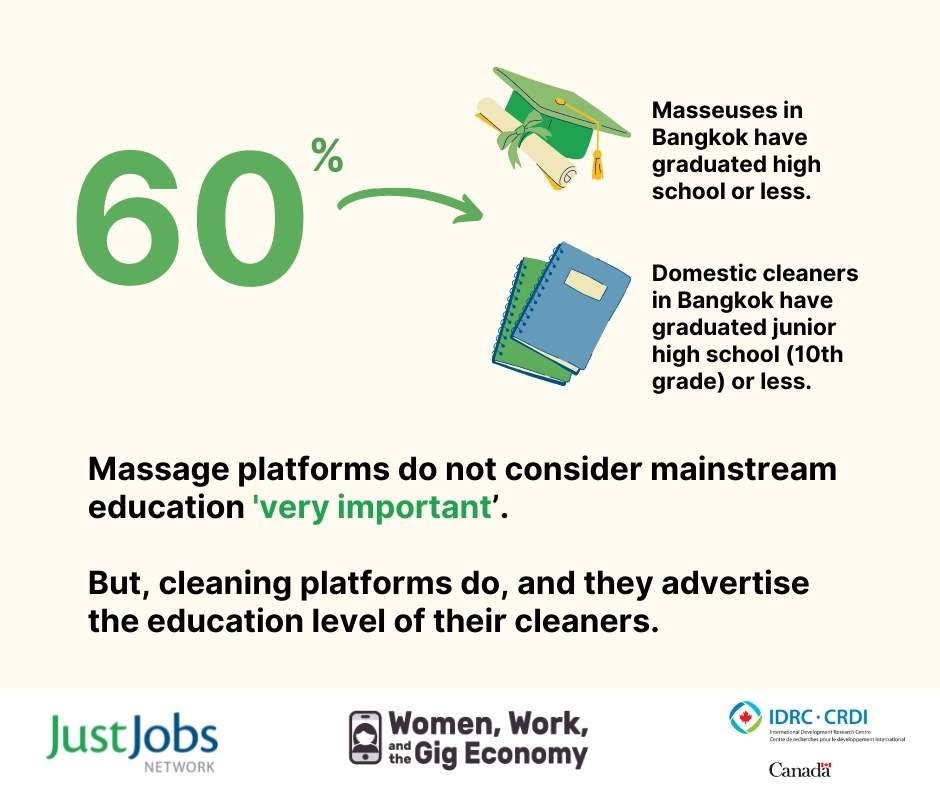 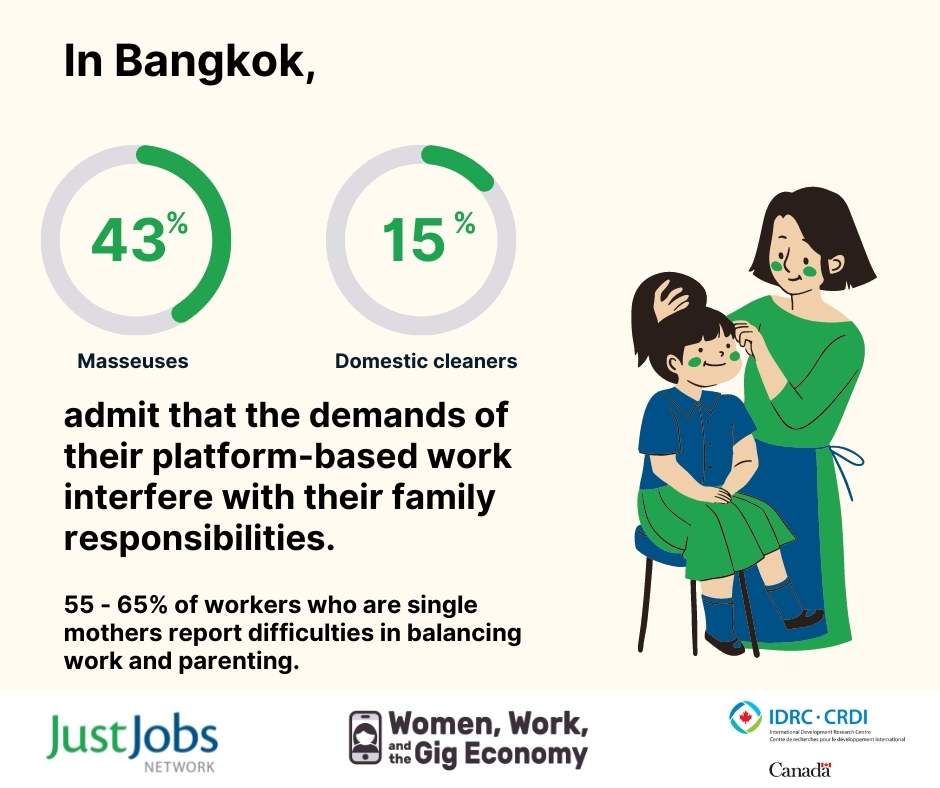 Women on labor platforms often struggle to strike a balance between platform work and household work. Over 43 percent of masseuses and 15 percent of domestic cleaners working in Bangkok admitted that the demands of their platform-based work interfered with their family responsibilities. Single mothers are disproportionately affected by the rigors of platform work. 55 percent of masseuses and 64 percent of domestic cleaners who are single mothers reported difficulties in balancing work and parenting. Women admitted to cancelling family activities or depending on other family members like grandparents to take care of their children in order to fulfil their work commitments. 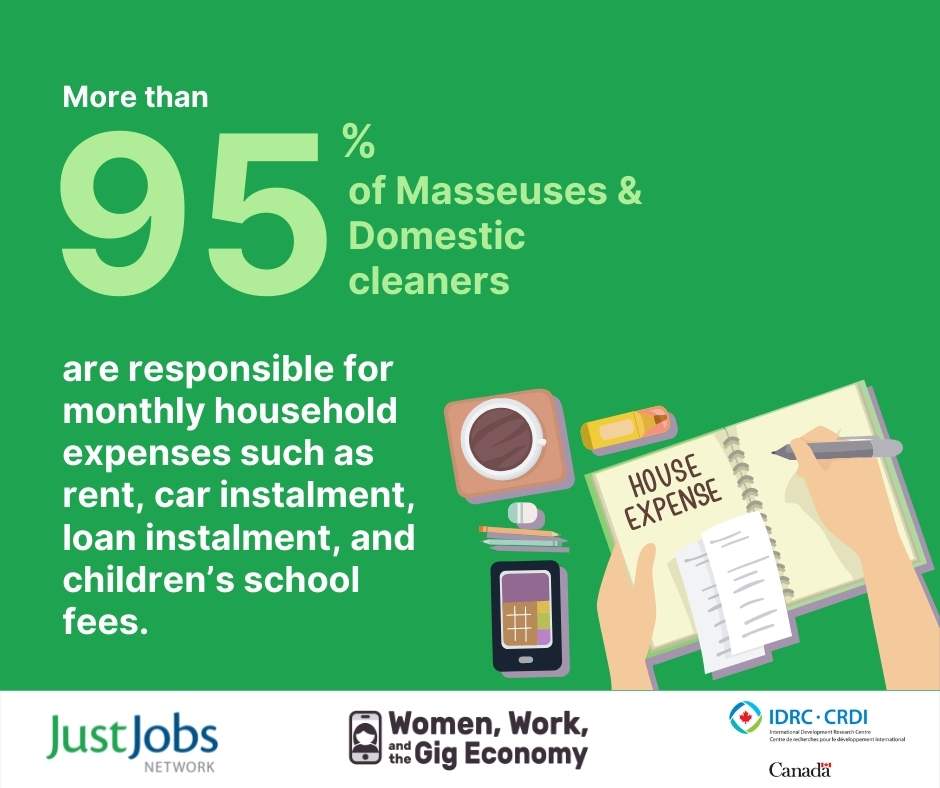 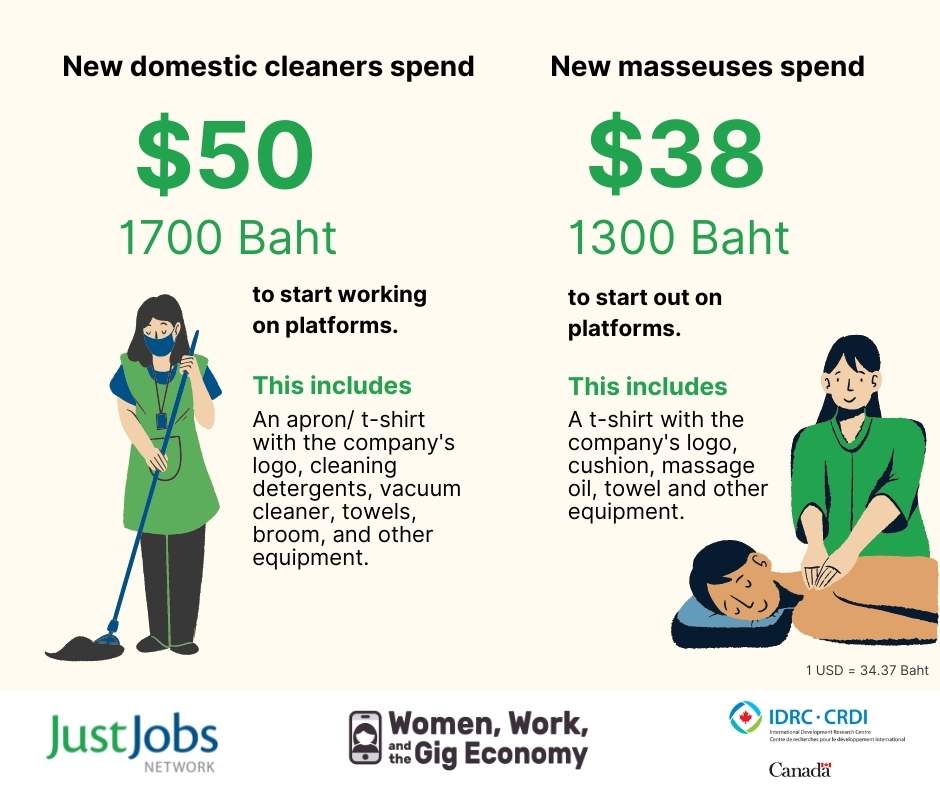 New entrants to the platform-mediated gig economy overestimate its financial benefits but underestimate its costs. Platforms themselves lack transparency regarding costs specific to getting gigs. New masseuses spend approximately $ 38 or 1300 Baht, which includes the cost of a t-shirt with the company’s logo, cushions, massage oils, towels, etc. Workers starting out on domestic work platforms spend around $ 50 or 1700 Baht for an apron or a t-shirt with the company’s logo, cleaning detergents, portable vacuum cleaners, towels, brooms, and other cleaning equipment.

As this research reveals, not only do labor platforms reproduce gender norms regarding the role of women in performing care work, but they also expose women workers to a greater risk of gender-based violence, to demands on their time that interfere with their family responsibilities, and to additional, and often hidden, costs for starting out on the platforms. Despite this, platforms in the market do not have any gender-responsive policies. The findings from this research are expected to be instrumental in advancing research-backed gender-responsive platform designs that center women’s voices.

*This research project is led by research team at Just Economy and Labor Institute in collaboration with two grassroots organizations: Empower and MAP foundations. Know more about the project here.